Have built pptx file, but on going to slide show get several things happening :
(1) scrambled colours and "line scramble" (similar as per bottom left hand corner of attached screenshot from "Dickinson" ppt)
(2) on first render of Dickinson title page the text "Presentation Title" is missing, but appears after scrolling forwards & backwards through file.

Even starting from a blank page in Presentations with a two-box blank slide, the text in the "Title" box does not render when pressing F5, despite looking OK in the editing mode.

When I have coloured text, it has ended up with a rainbow patterning in Slide show.
No such problems with my own file in Libre Office 6.1

A similar problem to this "line scramble" has just occurred in PlanMaker, again with an xlsx which renders OK in LO 6.1. 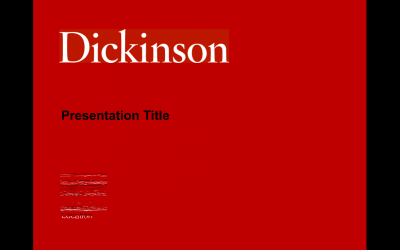 Thanks for reporting this problem. Please share the associated file of Presentations 2021 in which you are getting this problem so that we can do further investigation for resolution.

If you want to send it to us privately, please send us an e-mail to forum[at]softmaker.de

Please also include the forum URL of this topic so that we can trace your e-mail.
https://forum.softmaker.com/viewtopic.php?f=391&t=20239
Top

Thanks for sharing the file and screenshots. I tested your file in Presentations 2021 on Linux Mint Cinnamon 19.3 and it ran smoothly without any problem. I sent you a screen-recording also on your email.

Please update your graphics drivers if outdated and let us know if it fixes this problem.

If still not fixed then please share your sminfo file which you can generate by clicking on '?' > About > Write system information so that we can do further investigation on this issue.
Top

Have generated & forwarded sminfo.txt from this machine by email.
Top

Thanks for the update. I have forwarded all the details to our development team for further investigation of this problem.

If possible can you create a video of this problem as I did, using any screen recorder software?
Top

Everything looks as expected now.
Many thanks.
Top
Post Reply
7 posts • Page 1 of 1

Return to “Presentations 2021 for Linux”