Solution expanded -- How to open, edit & save files stored in the Cloud, while working with Softmaker

Post here those questions, bug reports and suggestions for SoftMaker Office 2021 for Windows that do not fit in any of the application-specific subforums.
Post Reply
6 posts • Page 1 of 1

Solution expanded -- How to open, edit & save files stored in the Cloud, while working with Softmaker

I would like to use a cloud storage site where I store and if possible create, open, edit and save new files I am working on while using Softmaker Office. Which online storage site(s) or "drives" can be made to behave almost like a regular offline folder, when using Softmaker? How do I open, edit and save files located at an online storage site while using Softmaker Office?
The most important advantages of using MS Office in conjunction Microsoft's OneDrive Cloud storage site are that you can't lose your files through crashes of your computer or through drive failure, and that you can work on your files anywhere and on any other computer as long as you can go online. For this reason it would be great of you can link your Softmaker productivity with an online storage site as well. Advice about this matter would also be great.
Last edited by ecbritz on Sat Oct 03, 2020 5:33 pm, edited 8 times in total.
Softmaker 2016 & 2018.
Top

Re: How do I create, open, edit and save files stored at a cloud storage site while using Softmaker Office?

Currently, we don't have this integration, but I have forwarded this feature request to our development team. Thanks for your suggestion.
Top

First solution: save to OneDrive while working with a Softmaker Office program

Thanks SuperTech but I seem to have found a solution.
If you have OneDrive up and going on your Windows 10 computer, you can open, edit and save files directly to OneDrive while using Softmaker Office programs such as Textmaker. You don't need MS Office to utilize OneDrive Cloud file storage.
SAVE FILE TO ONEDRIVE WITH TEXTMAKER: File > Save as > Scroll down the list of folders on the far left side of the "Save as"-screen > Select OneDrive or a subfolder created within OneDrive > Save.
OPEN FILE IN ONEDRIVE WITH TEXTMAKER: File > Open > Scroll down to OneDrive to open a stored file.
The first 5 GB of files are free to store at OneDrive. But you can buy more storage space.
If you open a OneDrive account, you can access your files stored in the Cloud directly by utilizing the OneDrive App. The OneDrive App behaves almost like an offline folder. 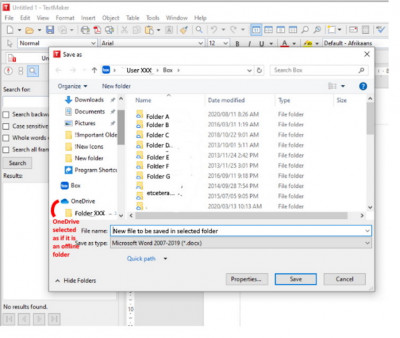 The Cloud Storage site Box.com can be used in the same way. Sign up to Box.com . Also install Box Drive at https://www.box.com/resources/downloads . You should now be able to "save to" your folders at Box.com or retrieve your files from Box.com using Softmaker Office programs. See the picture attached to the previous posting. Box.com is shown as an alternative Cloud storage "folder".

You can add other Cloud "drives" or "Cloud folders" if you want as much free Cloud storage as possible, or want to try out different Cloud storage sites. I have added pCloud to my list. You have to sign up to pCloud and also download and install the pCloud Drive to make it work. See the attachment. 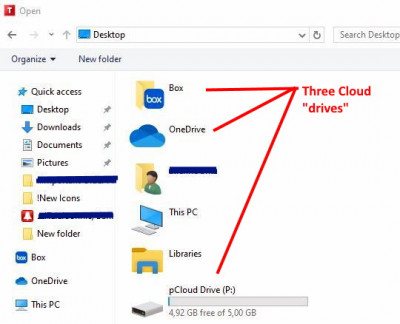 Re: Solution expanded -- How to open, edit & save files stored in the Cloud, while working with Softmaker

I have been doing this (using OneDrive) for years. It's a critical function, because I will often be writing away from my desktop on my Surface Go, and I'd rather use OneDrive because it's tightly integrated with Windows.
But lately I've had some frustration. Clearly it's necessary when you stop working on one machine that you give OneDrive time to upload the changed file. I don't know whether it's something to do with OneDrive or the 2021 version of Textmaker, but quite often it will seem that OneDrive has finished doing its thing, so you close down the machine and when you come to open it on the other one the file hasn't updated. You have to go back to the other machine, launch Windows again, let OneDrive do its stuff, and then you can shut it down and the sync will have happened. It's more annoying than disastrous, but it was enough to push me back to giving Word a try again after many years thinking it had just gone to pot.
(I have an Office 365 sub largely because it's the cheapest way to get 1tb of cloud storage, but have resisted using Word for many reasons).
Word seems to work very differently, holding edits in a hidden temporary directory/file, and syncing as you go along. Trouble is that twice now it has lost a significant amount of text in the process. That's clearly much more serious, and has driven me screaming back into the arms of Textmaker (which I've always liked far more - bless its flexible UI).
BTW Textmaker is much better at returning to your last point of editing than Word, which tends to go to the last point you edited on that particular machine.
I realise the problem is more likely to do with OneDrive than Textmaker, but if you have any suggestions about how to force the sync that would be really welcome.
Top
Post Reply
6 posts • Page 1 of 1