Tried FreeOffice in December 2018. It worked fine, but sometimes, PlanMaker was slow, so I decide to go with SoftMaker Offcice 2018 NX universal, since there was a 64bit version. FreeOffice is 32bit. Never tried to print on FreeOffice.

So, maybe because it could be an upgrade, installed FreeOffice again, and then, SoftMaker Office 64bit, and it worked.

But, PlanMaker freezes everytime I need to print. Have to close it on TaskManager, or it gets stuck fever. From time time, it prints, with hours of delay, but with black areas on cell groups, without borders, etc...

Problem remains on both PCs.

Later, decide to uninstall Sofmaker Office, and go back to FreeOffice, and problem remains.


I really need some help, because at this time, I feel like I have threw money away...
Top

Could you please try to install the 32bit version of SoftMaker Office 2018 and see if it works better on your machine?
https://www.softmaker.com/en/
Sven Leßmann
SoftMaker Software GmbH
Top 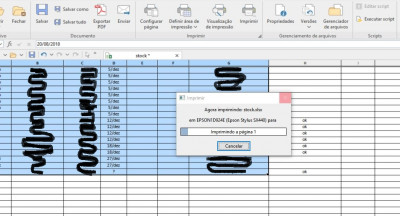 Trying to insert picture from the "freezing" moment.
It's in portuguese, but it's easy to understand that it's the printing window.
After this, I can only close it with TaskManager, or insisting on closing window, and then, windows reports error to Microsoft.
Top

Please remove the printer from Windows and then add it again. Make sure the newest available printer driver is installed. Does that help?
Sven Leßmann
SoftMaker Software GmbH
Top

After this, PlanMaker 64bit is working better and it's possible to print without "freezing".

I don't know if it's normal, but MS Office had a considerable faster response... Sometimes, it's takes about 5 to 10 seconds to save files or make a simple cell alteration.

Seems to be working fine.


Never had a reply from SUPPORT, very disappointing from a paid software:

So does the problem still exist or does it work fine now?
Sven Leßmann
SoftMaker Software GmbH
Top

Return to “PlanMaker 2018 for Windows”