Post here those questions, bug reports and suggestions for SoftMaker Office 2021 for Mac that do not fit in any of the application-specific subforums.
Post Reply
2 posts • Page 1 of 1

After being a very longtime MS Office user, and our in-home business coming to an end (retirement looms), it was time to stop shelling out $100 per year for that software and get something that still suits our usage, but was either free or much cheaper.

Most Office alternatives save your files only to a remote server (MS Office online, Google Docs, and others). No way. We don't store any of our personal data on anyone else's servers. Local drives only.

That really only left SoftMaker Office and LibreOffice. Tried the latter and hated it. Clunky interface and it couldn't even open very simple documents created in Word and Excel correctly. SoftMaker Office did open those as expected, and even complex docs. Winner! More than happy to pay the $30 sale price for your suite.

On to the issue. The font menu in the suite (and it's the same in the Windows version) needs to be better implemented. Rather than showing you the typeface options for a font, it only shows a single name for a grouped set. You then have to "discover" the rest by clicking the Bold and Italic buttons to see what happens. This would be workable (though still clumsy) if it worked correctly. Instead, it's very confusing to the user what's happening and why. Since I've worked in the printing industry for decades, I know what SoftMaker is doing, but it's not even consistent.

Example: Here are the fonts I used for a test. 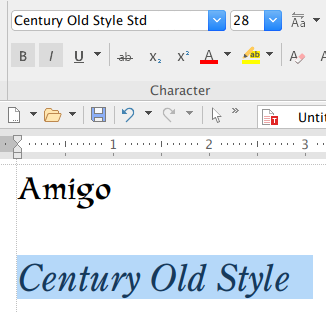 
Even less sense is the Amigo font. I purposely chose a font that had only a regular style to see what would happen. If I click the bold button, nothing happens. Which is correct since there is no bold version. But if I click italic, TextMaker slants the text, despite the fact there is no actual italic font. 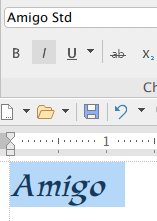 
No text editing software should ever do this. Applying a fake attribute only causes problems. When going to your laser or inkjet printer, it may or may not print italic because of the lack of an actual italic font. In professional print shops, we really hate fake attributes. It causes the RIP to either crash because of the nonexistent outline font, or it substitutes a default font.

Solution: Replace the bold and italic attribute buttons with a secondary drop down list of only typefaces that exist, such as those used in the Adobe suite.


Per the above example, Amigo shows Regular as the only version option since it is indeed the only one.

This somewhat simple change will make it much clearer to the user what fonts they can actually select and use in their documents.
Last edited by Kurt Lang on Fri Sep 10, 2021 8:21 pm, edited 1 time in total.
Top
Post Reply
2 posts • Page 1 of 1