Of course, I am looking into the bugs which I had reported for Office 2018. In the attachments, you find two ODT files, one of which differs in the formatting of content.xml. The result is a false alignment in TextMaker.

LibreOffice still ignores the extra white-space between XML-tags, as it should be, and both documents look identical. TextMaker does it wrong. I have not tested extra white-space inside text-nodes, as it must be ignored as well (and was not in 2018).

PSE correct this bug as it complicates the work with the xml-code of future ODT documents.

Thanks for reporting this problem. I have forwarded the details to our development team.
Top

Please check the screenshots of the file in TextMaker and LO. Please share details of the problem which "false alignment in TextMaker" and " extra white-space" you mentioned. 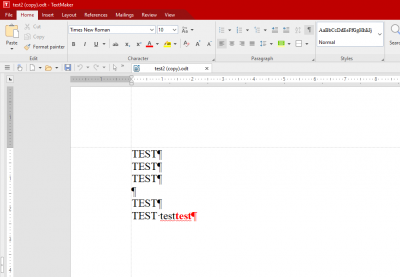 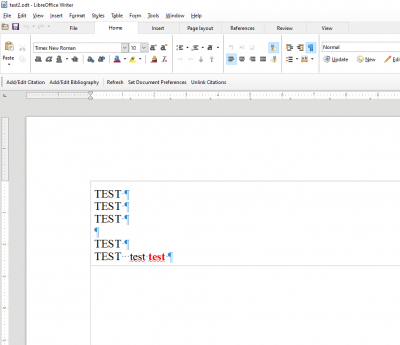 Re: [IGNORE Solved in 2021] TextMaker still misinterprets white-space between tags.

I have tried for half an hour, to reproduce the behavior which I had originally described in the German speaking forum AND CAN NO MORE. Ergo. It looks like To my shame, I admit that I might have confused the two versions of TextMaker, i.e. 2018 ad 2020, and have no other explanation for the observations made in the first article in this thread. Let me fall back to the conclusion in the German thread that I will not make any more comments about the ODF support in SoftMaker Office.

Ω
“Hindsight is in the eye of the beholder.”
Top

Re: [IGNORE Solved in 2021] TextMaker still misinterprets white-space between tags.

Thanks for your time and for the confirmation that the problem is resolved. Please don't feel shame or anything about it and please share if you find any problem or bug in SoftMaker Office so that we can investigate and resolve it. We again thank you for that.