This has happened a few times.
After completing a spellcheck (of a 50 page document, which might not be relevant), I have been unable to close the spellchecker.
TM gets stuck in a loop. It displays this dialog/requester,

but when I click 'Cancel', it just re-displays the same dialog. Over and over again.

Interestingly, while I have been typing this report, the document, in the background, seems to have ended the spellcheck on its own because teh dialog has disappeared and I have regained control of the document.
---
John
Top

Thanks for reporting this problem. Please share the associated file of TextMaker 2021 in which you are getting this problem so that we can do further investigation for resolution. Is this problem reproducible or happened once only?

If you want to send it to us privately, please e-mail us at the forum[at]softmaker.de

Are you quite certain that you have to have a copy of my document? I ask because (1) it is a little troublesome to send it, and (2) I do not think it will be useful to you if I do so. This is why: What happened a few minutes ago was similar to what I described before, as follows:
- I selected one word.
- I pressed Shift-F7 and looked at the Thesaurus list of synonyms.
- I clicked 'Close'.
- TM2021 went into an endless loop of I could not break the loop. I tried clicking 'Cancel' and I tried clicking the red 'close' gadget, but TM kept looping back.

Exactly as before, what broke the loop was when I opened Safari and started to write this report. When I flipped back to TM, the dialog was gone.
Next time it happens, I'll experiment with other possible work-arounds, such as by clicking just on the desktop, or switching to something else, not Safari.
----
John
Top

Non-reproducible problems are tough... we'll wait for your future comment. Thank you!
Top

It has just happened again. 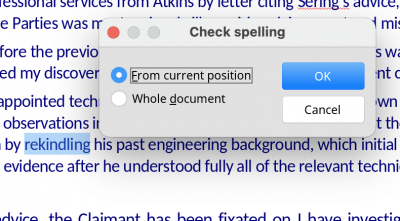 No mayor how much I tried to vanquish it, it would NOT go away until I clicked on something that was not in TextMaker, and then it disappeared.

New information:
1. It did not have to be Safari that I clicked on, just somewhere outside texMaker.
2. Once it had gone, I found it difficult to get ANY response from Shift-F7. TM simply ignored Shift-F7 until I had tried it several times, when it did then respond. Perhaps something was still in the process of dying-off and being cleared away in the background.
3. I forgot to mention that, on a recent-version MacBook Pro, Shift-F7 has to be pressed, not as a quick press of Shift-F7, but as a sustained hold of Fn-Shift-F7 (released when it executes). I don't know whether this has any relevance.

In the meantime, we have the workaround I have described.

I don't see how I can help any more with this but I hope I've given enough clues for your developers to track down this errant behaviour in the source code.
---
John
Top

Thanks, could you please go to "? | About | Write System Info" and send us your sminfo.txt file?
Top

Although I couldn't reproduce the issue, I reported it the developers.
Thank you
Top
Post Reply
8 posts • Page 1 of 1