I have been testing out TextMaker's ability to accurately translate .docx files created in MS Word. It is accurate for the most part, but I recently came upon two errors in a file where a table that should appear on one page goes over into a second page, and an image fails to show at all. What was strange about this is that these two particular pages translate properly on both LibreOffice Writer Linux and WPS Writer Linux. (They made other translation errors, but not these two.) I have attached the file in the hope that it will help you improve the translator.

Much for the same reasons that I pointed out in the other response in the General Forum.

I have found out that TextMaker interprets white-space in the “ source code ” (na. But I cannot write “XML” too often or people die of heart-attacks, again) of documents. For the time, this concerns mainly OpenDocument (odt) but what you describe is almost certainly related to the same kind of misbehavior with docx.

Basically, every Office-program that I have scrutinized up to now uses its own OOXML style to write docx. Unfortunately, their capacities to interpret completely and correctly a given docx document, depends on the time, effort and knowledge that something, someone, providence put into the routines which do the job.

If TextMaker understood only its own dialect of OOXML, you just could not downright read any docx-file in TextMaker. Everything which goes beyond that is a question of devotion.

The test file is a precious piece of information. I hope the SoftMaker team has taken my previous reports into consideration as I pointed out similar misbehavior. If we are lucky, the whole complex of false alignments and spacing could be handled in one go and future versions of the Office-suite will be cleaned of these glitches.
“Hindsight is in the eye of the beholder.”
Top

Hi, I was able to reproduce the issue and I'm going to report it to the developers.
Top

Hi, if you right click the table and then go to Properties > Table > Wrapping > None, this will fix the issue.

The page wraps to the next page, although there's enough space on the first page.
The developers will try to fix it in the future.
Top

Thanks for that suggestion, miguel-c. I tried it and it works, except that it then creates a blank wide page after it. This can be easily fixed, and when it is, it reads properly in both TextMaker and MS Office. Is there a way to set the table wrapping to "None" as a default?

The second issue, the missing figure, is still a problem of course. Is there a way to fix that one as well?
Top

1. By default, new tables have no wrapping
2. You did mention a missing image, but I can see the same image in both Word and TextMaker 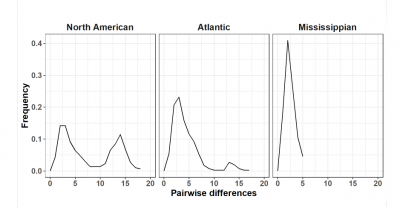 You have the right image, but I checked again, and can't see it. TextMaker obviously knows it's there because it can see an outline of where the image should be (see attachment). Could it be a setting again?

Thanks for working with me on this, miguel-c. I really like the Softmaker Office programs and would love to use them instead of MS Office on Linux!

My apologies. I forgot to open it in Linux.
So, in Linux the image doesn't appear. The reason is because it's an EMF file and SoftMaker Office for Linux doesn't support those files yet.
Please convert it to PNG and insert the image again.
Top

That's interesting. The image was done in R (a statistical package) by a colleague and inserted into the word processing file. That wouldn't happen often enough to worry me. But one thing I don't understand is why you were able to see the image in the Mac or Windows version of TextMaker if SoftMaker Office doesn't support those files. Did you mean that SoftMaker Office Linux doesn't support that filetype?
Top

Sorry, forgot to mention Linux in my previous post (I've just updated the post to include it).
EMF is only supported in the Windows version.
Top

OK. I sent SoftMaker a feature request to add EMF translations to the Linux and Mac versions.
Top

i think in a similar vein.see how the attached opens in libreoffice-writer compared to textmaker

milomak wrote: ↑
Sat Aug 03, 2019 7:19 pm
i think in a similar vein.see how the attached opens in libreoffice-writer compared to textmaker

Yes, it appears to be a wrapping issue on the table causing the issues on page 2.
Top

milomak wrote: ↑
Sat Aug 03, 2019 7:19 pm
i think in a similar vein.see how the attached opens in libreoffice-writer compared to textmaker

I wish that this was true, or that, conversely, TextMaker was consistently better in MS translation. But in three years of looking and testing, I haven't found any one Linux word processing package that was consistently better than the others. (Including WPS as well.) Each one seems to make different translation errors, and if you happen to use track changes (I use it a lot), libreoffice has yet to implement it in the margin of a document, which makes it much easier to follow. (Both TextMaker and WPS do this.) If you use line numbering, TextMaker translates them nicely, whereas libreoffice puts the translated MS Word line numbers right next to the lines, making it ugly and difficult to read. Sure, you can fix any of these things in a given document, but this is a major pain when you're working collaboratively with PC or Mac users that write in MS Word.
Top

i hear your point.

but we don't pay for libre and wps.

so i would at least expect what i pay fr to match what i can get for free.